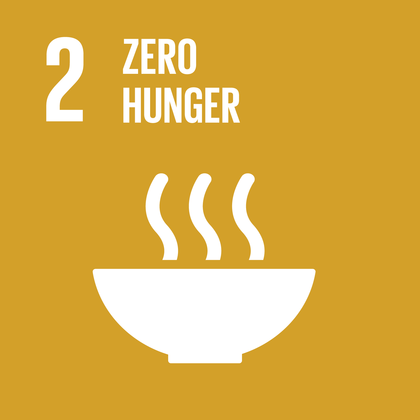 Goal 2 states that by 2030 we should end hunger and all forms of malnutrition. This would be accomplished by doubling agricultural productivity and incomes of small-scale food producers (especially women and indigenous peoples), by ensuring sustainable food production systems, and by progressively improving land and soil quality - wikipedia

Agriculture is the single largest employer in the world, providing livelihoods for 40% of the global population. It is the largest source of income for poor rural households. Women make up about 43% of the agricultural labor force in Developing country, and over 50% in parts of Asia and Africa. However, women own only 20% of the land.

Globally, 1 in 9 people are undernourished, the vast majority of whom live in developing countries. Undernutrition causes wasting or severe wasting of 52 million children worldwide, and contributes to nearly half (45%) of deaths in children under five – 3.1 million children per year.

Chronic malnutrition, which affects an estimated 155 million children worldwide, also stunts children's brain and physical development and puts them at further risk of death, disease, and lack of success as adults. As of 2017, only 26 of 202 UN member countries are on track to meet the SDG target to eliminate undernourishment and malnourishment, while 20 percent have made no progress at all and nearly 70 percent have no or insufficient data to determine their progress.

A report by the International Food Policy Research Institute (IFPRI) of 2013 stated that the emphasis of the SDGs should not be on ending poverty by 2030, but on eliminating hunger and under-nutrition by 2025. The assertion is based on an analysis of experiences in China, Vietnam, Brazil, and Thailand. Three pathways to achieve this were identified: 1) agriculture-led; 2) social protection- and nutrition- intervention-led; or 3) a combination of both of these approaches.